While visiting a Forge customer in Brisbane, Australia, I was asked... "can the Forge-Viewer display large bitmap images, like a scanned document, or a large terrain-map?"   Yes it can - here's how....

Using the Forge Viewer for large-images, let's you take advantage of the built-in markup and measure tools - this is the same feature found in BIM360 for viewing PDF's.

Large images are broken up into 'tiles' of bitmaps, at different 'Levels of resolution', forming what is called a 'tile pyramid'. 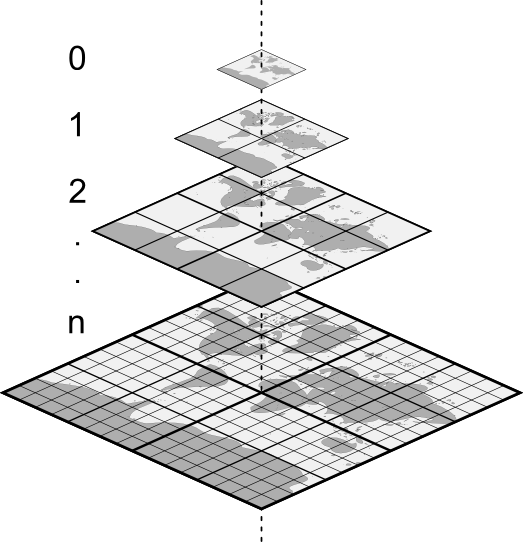 At the top of the pyramid, level 0, a single tile, it shows a blurry, low-resolution, version of the map-of-the-world image.

The next level down, level 1 (middle image), the map-of-the-world is split into four tiles and the resolution is higher, less blurry.

We keep going, generating many levels, and more image detail.

When a browser wants to view a city, say Paris, from google maps, it doesn't load the entire map of the world and every tile in the 'tile pyramid'.  It's too big.

Instead, the browser figures out the right 'level' in the pyramid, and only loads the tiles that are specific to Paris, at a resolution that fits our screen resolution.

For a faster loading experience, the viewer, can  load, a low-quality 'preview' of the "Paris tiles" first, before loading the final tiles.  This is easy to do with a tile-pyramid.

You can see this in the animation above.  The Forge Viewer is showing a PDF made of tile images.  It loads level 10, then 11, 12 and finally settles on level 13 to match my viewport and MacBook Retina pixel density.  On the righthand side, I have the network debug console open, showing the image tiles steaming in.  I set the network load performance to 'slow 3G' to slow things down, so you can see the effect.

> How to create your own tile-pyramid

To provide some sample content for my demo, I'm going to pull a tile-pyramid from OpenTopoMap, specifically, a terrain map, so I can demostrate the measure tool.

Here is the bash script I used...

The script only downloads a section of the TopoMap tiles into a local folder.  Each tile is 256x256, yet the full terrain width and height comes to 6k x 6k pixels, for this sample set (a set region surrounding Chicago at maximum level 13).

Now I modify the bubble.json file to point to the new folder containing all those image tiles.  And I upated the pixel resolution too.

When I open the index.html file, and point the documentId to the topo/bubble.json file, I now see my terrain map !

I can zoom in and out to get more terrain details. I can also add markup and measurements.

Note: I use window.location.hash, to specify the tile folder name. i.e.. topo/ is the folder, so I use #topo in the URL.

Say you have scanned a large document (OCR) and now have a really large 6k by 6k TIFF file.  It's 200MB is size, which is too big and clunky to load quickly in a browser, and also ... you want to add markup and measurements.

So, let's first convert the scanned TIFF image to a jpeg tile-pyramid, like we did with the two examples above (PDF and Terrain). I'll use imagemagick to do this.

From the commandline, I type in...

I then create a bubble.json file.  This tells Forge Viewer where the folder of tile images is, and also the mask, for example: out/z/y/x.jpg.  I also set the pixel resolution, as done in the terrain demo.

I open the ./index.html#out file and my OCR scanned document appears - it loads quickly and I can measure and do markup's.

Included in this example are the files you need to take this 2D demo 'offline' including the markup and measure tools.  See the files listed in the GitHub repo.

That's it - stay tuned for more handy 2D Forge Viewer ideas in my next blog post. 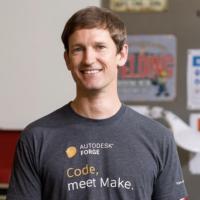